Make me a sandwich

Can you make me something to eat? ‘Yes, I could do it myself, but it tastes better if you do it’. I caught myself saying this the other day and had to wonder: Why is that? So I went on a quest to discover the answer. I performed extensive kitchen table research, questioned a few co-workers and reached the conclusion I knew all along: food tastes better when someone else makes it. period.
When I was a kid, I remember my cousin and I making sandwiches, we would use the exact same ingredients, slice the wich the exact same way, then I would hand her mine and she would give me hers. Why you ask? Because hers tasted better! And what about all you coffee drinkers out there (you know who you are), how much money do you spend on coffee a year? And I am not typing about the coffee you make in your kitchens, but coffee you pay someone to make for you? I am not afraid; I would say I spend, on average, $8/week on coffee, some weeks more. That is over $400 a year (GULP!, pun intended). I have tried buying the exact same coffee and even bought (dare I say) heavy cream to mix with it, and nope not the same.

Another example, my Mom makes a killer; I mean mouth watering hurry up and finish this plate so I can get some more, potato salad. I can’t tell you how many times I have watched her make this culinary master piece. Several times asking' how much of that', 'what brand is that,' did you peel the potatoes vertically or horizontally'? But can I replicate the recipe on my own – HellllllltothaNOOO! I just can’t do it.

And copykat.com, yeah you say you have the Olive Garden’s alfredo and lemon cream cake recipes, but I beg to differ. I am pretty sure the Olive Garden paid you to leave out a few ‘key’ ingredients as I have tried both of these so-called "recipes", following each to the “T” and what do I get, another catastrophic disappointment.

But there is hope, there are some recipes out there you (me) just can't mess up. Here is one of them, get a watermelon, a pineapple, grapes, and strawberries, chop them up and throw them in a bowl - whoolaa. It doesn't matter who makes it, it still tastes (and looks) guuuud. 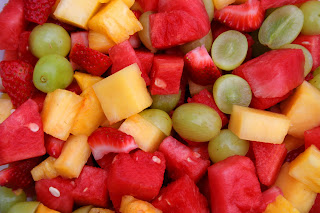